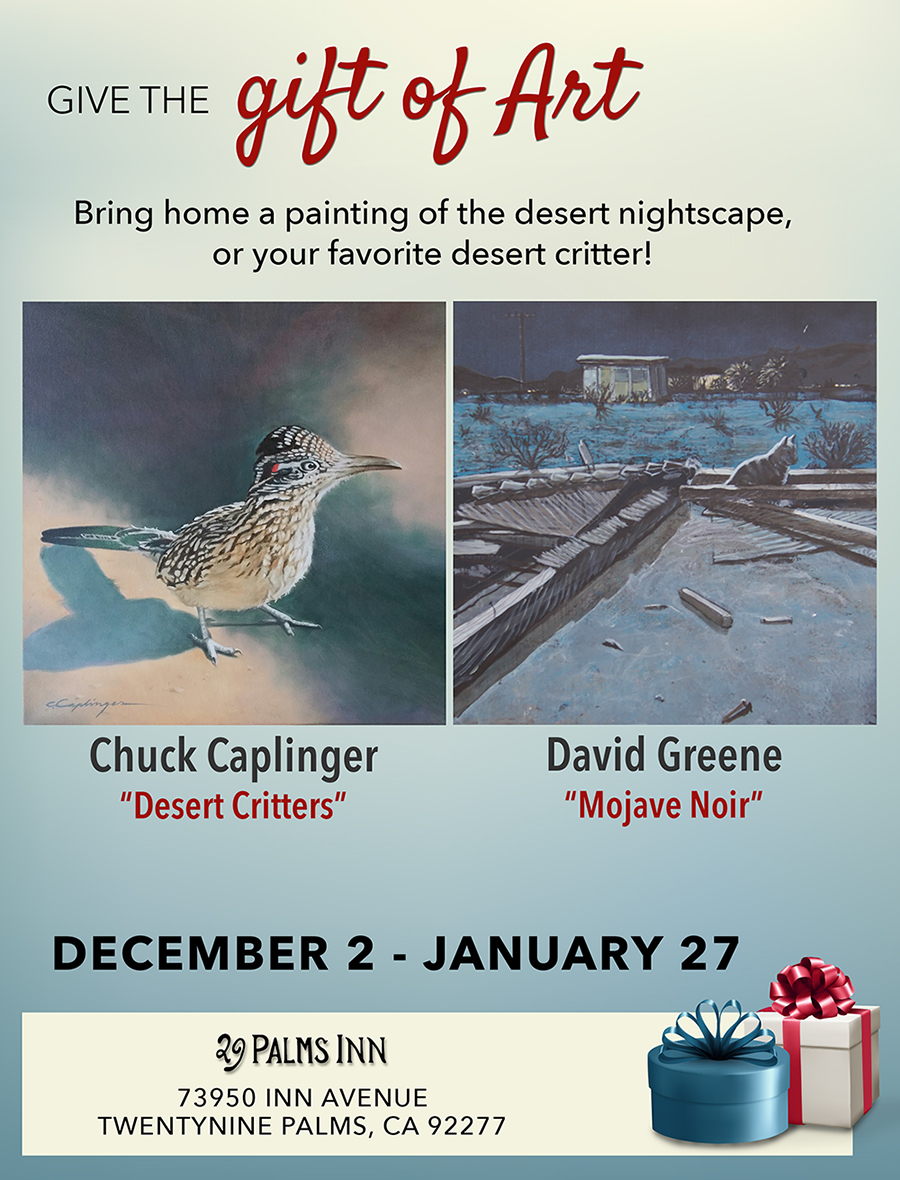 A Texas native and professional artist for over 40 years Chuck Caplinger has worked in the creative fields of design, illustration, and art direction. His oil paintings and portraits hang in public and private collections around the world, and his murals are found in cities throughout California and Texas.

Chuck and his actress wife, Holgie Forrester, moved to Twentynine Palms California in 1997, trading a Hollywood studio for a beautiful dome house near the entrance to Joshua Tree National Park that has since become Chuck Caplinger’s Desert Art Studio & Gallery. Inspired by this new environment Chuck began to create stunning oil paintings of the desert wildlife and landscape, many of which are on display now at the 29 Palms Inn.

Chuck has been instrumental in promoting the arts and cultural tourism throughout the Joshua Tree gateway communities and co-founded the Morongo Basin Cultural Arts Council in 2001. In addition to starting the Arts Council Chuck also co-founded the Open Studio Art Tours (now called the Hwy 62 Open Studio Art Tours) which has grown to be one of the biggest art events of the year in the high desert. In 2004 Chuck co-founded a public arts program for the City of Twentynine Palms and the Public Arts Advisory Committee (PAAC) and designed and donated the concept for the City’s iconic 29! sculpture.

Chuck is also an incredibly talented muralist whose work can be seen throughout the City of Twentynine Palms and across the state of California. Most recently Chuck collaborated with Art Mortimer and created the California Desert Protection Act 20thAnniversary mural at the Old Schoolhouse Museum here in Twentynine Palms – visible as you exit the driveway at the 29 Palms Inn.

My work is as about as regional as it gets. Localism taken to the point where I don’t even leave my yard to look for subject matter. It’s a function of living in a wilderness area with unobstructed views of the surrounding mountains and clear skies most nights. Wonder Valley is in the eastern part of the Morongo Basin. It’s the only mountain basin on the continental U.S. that runs east-west. The site of an ancient sea bed, and skirting the edge of the San Andrea’s Fault , the area has always been considered a locus of natural energy. All the raw forces of nature are at work on a grand scale. Standing in my yard I have a clear view from one end of the basin to the other. All of these paintings are inspired by what I see every night when I take the dog out for his walk.